We are thrilled to announce that award-winning British actor, Josh O’Connor (The Crown, God’s Own Country, Peaky Blinders, Mothering Sunday), is auctioning two personal items in aid of Shout ahead of Giving Tuesday.

The eBay charity auction will run from Monday 29th November 2021 for 10 days, closing on Thursday 9 December 2021.

Thank you Josh for your incredible support 💙 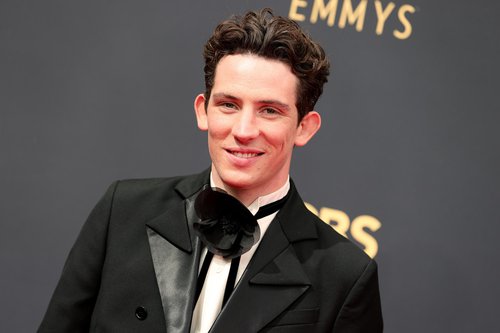 The first item in Josh’s charity auction for Shout is the bespoke LOEWE Tuxedo that he wore at the 73rd Primetime Emmy Awards on 19 September 2021 in Los Angeles, where he won an Emmy for Outstanding Lead Actor In A Drama Series for his role of Prince Charles in series four of The Crown.

The second item is an incredible artwork about self-expression which Josh conceptualised and hand painted on plexiglass as part of a photo shoot for ODDA Magazine in New York.

“In the past few years, I’ve been surrounded by friends and family who have gone through mental health problems. More recently, I’ve had my own challenges. I understand how important it is to open up about how you’re feeling but also how hard it can be to start that conversation, which is why I wanted to do this auction in aid of Shout."