A poignant mural of The Prodigy’s former frontman, Keith Flint, who took his own life in 2019, has been revealed in Hackney, London today ahead of World Suicide Prevention Day on Friday 10th September.

A collaboration between world-renowned street artist, Akse P19, and music and wellbeing festival, Headstock, the mural raises awareness of the importance of suicide prevention and of Shout 85258 as the UK’s first 24/7 mental health text messaging support service for anyone in the UK who is struggling to cope. 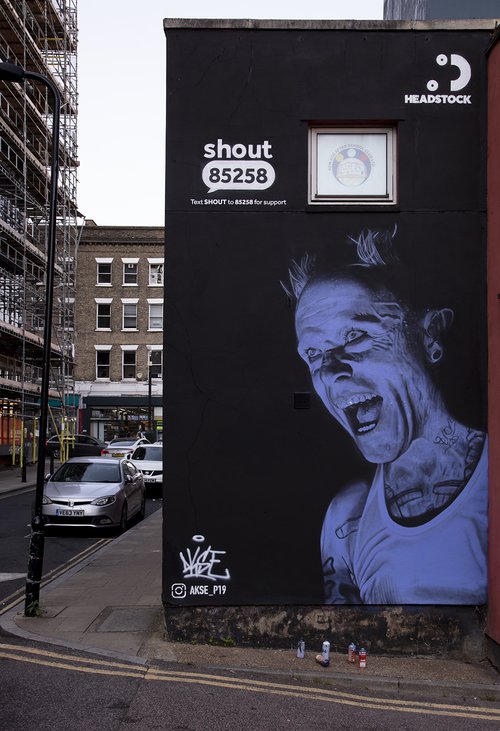 The artwork is located on the side of the Hackney Co-operative complex at 62 Beechwood Road, less than 100 yards from the site of the old Four Aces Club, where The Prodigy played their first ever gig.

The project, which is being supported by the Night Time Industries Association, was made possible by a Crowdfunder campaign set-up by Headstock which raised more than £10,500.

This is the second time that Headstock and Shout have collaborated with Manchester-based street artist, Akse P19 – who has made recent headlines with his critically acclaimed murals of Marcus Rashford, Captain Tom Moore and George Floyd. In 2020, Headstock and Akse P19 teamed up to create a mural of Joy Division’s Ian Curtis to mark World Mental Health Day and raise awareness of Shout 85258.

“Respect to everyone for coming together to make this happen for a cause so close to us. Akse has done Keef proud.”

"We are incredibly grateful to Headstock, The Prodigy and Akse P19 for raising crucial awareness of mental health and Shout 85258 as a lifeline for anyone in the UK who is struggling to cope. This incredible mural has been unveiled ahead of World Suicide Prevention Day. It is a day to remember that, while there may be times in all of our lives when we might feel overwhelmed, you are not alone and support is always available. Sometimes it can be easier to text than to say the words out loud, which is where Shout 85258 can help. Anyone in the UK can text 'SHOUT' to 85258 anonymously, confidentially and for free to speak to a trained volunteer any time of the day or night."

“Keith Flint was the original fire starter. He was a true trailblazer in electronic music, and I was lucky enough to see him perform with The Prodigy on a number of occasions. Off-stage, Keith struggled with his mental health, and he talked candidly about his ‘dark periods’. Tragically, this culminated in him taking his own life. We’ve created this mural to help remember Keith and ensure that his flame continues to burn brightly – but also to raise awareness of Shout 85258, and the incredible 24/7 text support service it provides. We hope that the mural will help anyone that sees it know that confidential support is just a text message away.”

If you are worried about someone you know and would like support, you can read our resources or text ‘SHOUT’ to 85258 to speak to us any time of the day or night.