Meet Holly, a 25-year-old small business owner and mother of two from the North East.

Earlier this year, Holly challenged herself to complete a marathon in memory of her close friend, Alex, who died by suicide. She wanted to run 26 miles for what would have been Alex’s 26th birthday in May. 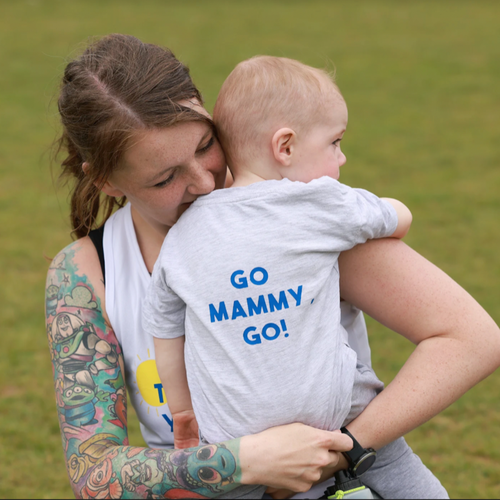 What started as a solo challenge soon became an epic event, as Holly’s and Alex’s friends and families joined her. On the day, 100 runners showed up to take on one of three distances. Holly raised an incredible £3,200 for Shout.

Why Shout? When Holly was experiencing thoughts of suicide herself, she texted Shout for help.

The support she received that night gave her a new outlook and the confidence to speak to her GP to get the mental health support she needed.

Tell us about your fundraising challenge

I decided to complete a marathon for what would have been my friend Alex's 26th birthday in May. Alex was a wonderful, kind-hearted soul who took his own life in 2020. Myself, his friends and family all miss him dearly.

I wanted to prevent this from happening to other people but I had to think big to raise the most amount of money possible for charity.

I told a couple of my friends about my idea and they said “you’re not doing that alone!” From that moment, my running event ‘If U Care; Run, Shout and Share’ was born, in aid of Shout and If U Care Share.

When I realised there may be other people like me willing to run for over four hours with the aim of supporting charities that support people and families affected by suicide, I opened it up to Alex’s friends and family, and asked if anyone else would like to join us.

We had lots of interest from people wanting to join; some weren’t regular runners and wanted to participate but wouldn’t be able to do the full 26.2 miles. This gave me the idea to offer three distance options: 10k, half marathon and full marathon.

On the day, we had over 100 runners, consisting of Alex’s friends, family and complete strangers. We were all running for the same purpose - to show anyone who has ever been in that dark place that they are not alone.

What motivated you to fundraise for Shout?

I, like many others, have been in that dark place. That black hole that sucks you in and makes you feel like there is no way out.

I hit rock bottom a few times after having my first son in 2018 and battling many struggles with his health from the day he was born.

One day I simply woke up and decided “this is it”. I couldn’t cope with the pressures and the worries, I truly believed my son would be better with someone else caring for him.

I’d leaned on my partner for a long time leading up to this date. He was struggling himself, so my issues were only adding to the weight on his shoulders. I stopped opening up to him because I could see how draining it was and that I was only making him worse.

One night, I told him to go up to bed and that I would be up later. I’d never thought about how I would end it all, I just imagined something would come to me and I would go with it. As I lay in the darkness, picturing all the happy memories I’d experienced since giving birth to my son, I felt nothing but sad and lonely.

I wanted to talk to someone but not someone that I knew, because I’m one of these people that puts on a brave face and pretends everything is ok, so it just wasn’t in my nature to ask for help.

That’s when I found Shout. I sent my first text not expecting to even get a reply. I suppose I was hoping someone would help me but I didn’t hold out much hope. It was a free service after all, and I was texting late at night - who would be sitting by the phone waiting for someone they don’t even know?

I got a reply almost instantly. I remember feeling shocked. I paused for a moment and thought about how someone was on the other end of this conversation who I would never ever meet. I could tell them anything and they wouldn’t judge me, wouldn’t look at me differently, wouldn’t panic or freak out or ask me uncomfortable questions.

I can’t remember much after that truthfully - I don’t even remember what we spoke about. I just remember I no longer felt alone. Someone was there for me, someone who I didn’t feel guilty about talking to. We spoke for a little bit and the Shout Volunteer reassured me that my feelings were valid.

I said thank you to her and took myself off to bed. The next morning I woke with a completely different mindset. If someone who doesn’t even know me wants me to live, how could my family, my baby, not want me to live? It was like it all clicked into place. It wasn’t me that was the problem, it was the depression.

I now felt confident enough to ring the doctors and book an appointment. I was given medication and within around 6 months I was back to feeling myself. It honestly feels surreal to think back to that time, like an out-of-body experience.

What was the highlight of the challenge?

My favourite part of our fundraising event was crossing the finish line. It was so emotional. Alex’s mam and sister were both waiting for us on the other side of the balloon arch and pulled us in for a massive cuddle. 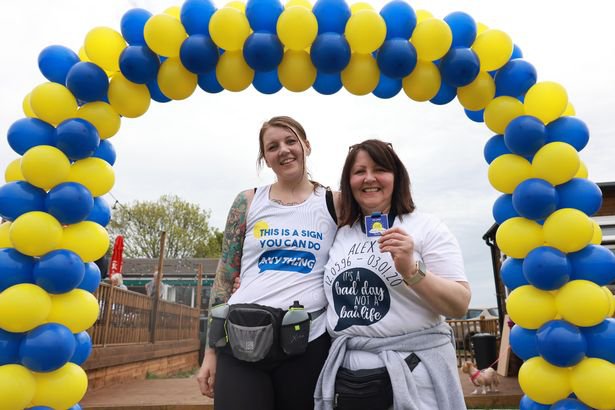 What was the most challenging part?

The run itself was very tough - it was a hot day and I’m like a twisty 3-year-old in the heat on a normal day. Add in the little factor of running 26 miles with the sun beaming down on me and I was ready to give in pretty quickly!

I was lucky to have wonderful friends that kept me going, their cheery, positive mental attitude pushed me every mile of the way. 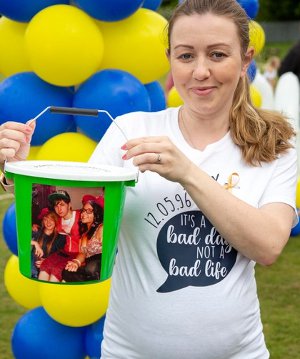 What is your top fundraising tip?

Contact EVERYONE. Anyone and everyone. The worst thing they can do is ignore you.

We did a post on Facebook appealing to local business owners, asking if they could donate anything for a raffle.

Alex was a popular man so once all of his friends and family shared the post, we ended up with the most incredible raffle ever.