As Simone Biles withdraws from the Olympics to focus on her mental health, following Naomi Osaka's similar withdraw from the French Open, our Clinical Supervisor and Chair of Diversity and Inclusion, Dr Amanda Brown-Bennett, examines the relationship between success and mental health.

Amanda also explores how stereotypes of success and strength sometimes result in silencing Black experiences, as we launch our Let It Out campaign to encourage young Black boys and men in particular to seek mental health support when they need it.

Success is often easily attributed to financial wealth and/or social or professional high-status, with some of the characteristics of successful persons including drive, ambition, confidence and resilience. What is vitally important, but sometimes overlooked, is the correlation between wellbeing and success.

The very complexities of the human condition suggest that every one of us experiences situations in life that may throw us off balance; where attainment, status and the like hold little value.

Success isn't always quantified by a relentlessness to push through at all costs, but in being able to take the time you need to tend to your selfcare and restore some equilibrium.

Simone Biles and Naomi Osaka courageously dared to put their mental wellbeing first, irrespective of the expectations and pressures placed upon them - not to mention the ones residing within them.

Black people have long been stereotyped by physical and mental strength, which along with some positive connotations, has also perpetuated numerous negative ones, often resulting in the silencing of their experiences and emotional health. 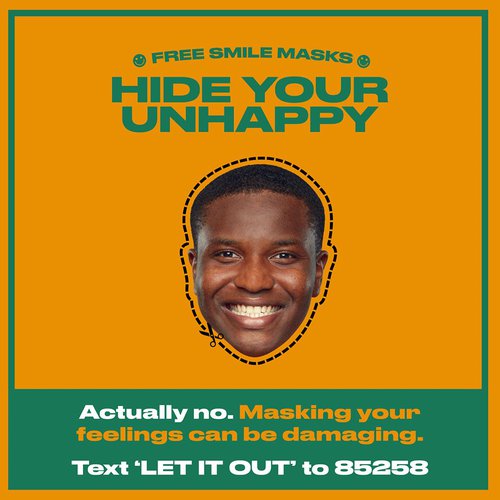 Our new campaign, Let It Out, aims to encourage young Black boys and men in particular to seek mental health support when they need it. Research for the campaign found that, despite being worse affected than many by mental ill health, young Black boys and men face significant barriers to getting the mental health support they need and often feel reluctant to open up about their worries in the first place because they feel pressure to appear strong and not overly emotional.

Seeking help and support when we feel stressed, overwhelmed or low comes from a place of strength, and failure to do so can have serious consequences for individuals. We must shift societal attitudes that lean towards the contrary and start to make it an expectation to put mental health and wellbeing first.

I feel that at these tournaments, both Simone and Naomi have been more successful than they could have imagined.

At Shout 85258, we want to encourage people to take the first step in breaking down some of the pressures and stereotypes they face, whether determined by culture, status, success or gender. We are here 24/7, providing a free, confidential text service where you can talk to a trained volunteer about anything concerning you, including discrimination, identity issues, abuse, depression or suicide.

Find out more about our Let It Out campaign.

Text ‘LET IT OUT’ to