Ashley and Owain took on an epic fundraising challenge for Shout - running the 86 mile route along Hadrian's Wall within 24 hours, starting during the night! Together they raised a whopping £4,000 to support our service.

We caught up with Ashley to find out what made him decide to take on the challenge, what the hardest parts and the highlights were, and what some of his top tips for fundraising are.

What motivated you to fundraise for Shout 85258?

I’ve had difficulties with my own mental health since I was a teenager. It’s only in recent years that I sought support and felt confident enough to speak about it. At the time, I probably didn’t even associate how I was feeling with mental health.

When I came across Shout, I had an overwhelming feeling about how beneficial that would have been to me.

Communication now is a lot more virtual and text based, and so it’s perfect that a text based service like Shout is available for people and (in my opinion) the younger generations who are more comfortable communicating digitally.

I lead an organisation specialising in supporting people with severe mental illness. We provide rehabilitation in an enhanced supported living setting. I’m hugely passionate about recovery and see the impact on people each and every day, when they get the right support.

How did you decide on your fundraising challenge?

I’m a keen runner. I got into running to help with my anxiety, self-esteem and general wellbeing. It's had a massive impact on my life and helped me through difficult times.

I heard somebody talking about walking Hadrian's Wall over four days, which sparked some interest for me. I started to wonder if I could run it in one day. It’s an 86 mile route from Newcastle to Bowness-on-Solway, which we planned to complete within a 24 hour window. To make the challenge even more difficult, we decided to start at 5pm and run through the night. The weather conditions were brutal - extremely cold with strong winds and, for the last 30 miles, driving rain. With a lot of will and a great supply of tasty food and drinks, it took a total of 21 hours to complete.

What was the toughest part of the challenge ?

I went into the challenge with my best pal and running buddy, Owain. We started strong but unfortunately Owain had an underlying chest infection and became really unwell after about 25 miles. Because of the extreme weather, his core body temperature dropped and he became hyperthermic. Sadly it wasn’t even a decision he could make - there was no way he could continue and after months of training and preparation he had to retire.

I had so many conflicting thoughts and feelings. I knew I had to finish the challenge but felt so sad for Owain as it was our adventure and something we had planned to tackle together.

The toughest part of the challenge physically was a five mile stretch with lots of rocks and scrambling up and down steep inclines. It felt like it went on forever. The weather made it even harder - I couldn’t see where I was going! 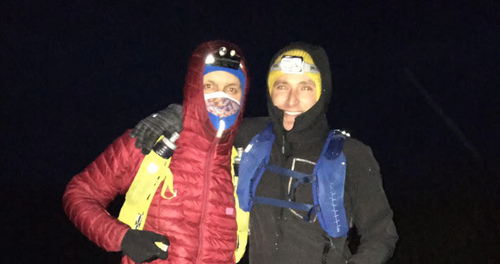 What were your highlights?

Along the route I saw lots of wildlife but most impressively was a beautiful barn owl that swooped in front of me. With the light of my head torch on it, it’s a sight I will never forget.

After running through the night, I met the support vehicle at about 6:30am. Owain had managed to get some sleep, take on some fluids and nutrition, change his clothes and was like a new person – he surprised me by lacing up his running shoes and joining me on the next section. I was so happy, I was tired and needing a boost and this really delivered. We agreed he would run five miles then rest five miles, but with absolute certainty Owain decided that we would run the final section and finish together.

An obvious highlight was finishing! The strong winds were blowing rain into our faces and the sea waves were crashing onto the road, but ahead was a big group of family members cheering for us. Getting hugs from everyone was just the best!

What are your top fundraising tips?

Reach out as far and wide as possible. I’m always a bit cautious about asking people for money but I found that people were asking me for the sponsorship link. Picking a challenge that people could never see themselves doing motivates them to support you and cheer you on!

Inspired by Ashley and Owain's epic fundraising challenge for Shout? Find out more about the different ways you can support Shout and check out our fundraising toolkit.