An overview of who is texting Shout 85258 for mental health support and why highlighting our texter demographics overview and the six most common issues people text us about. 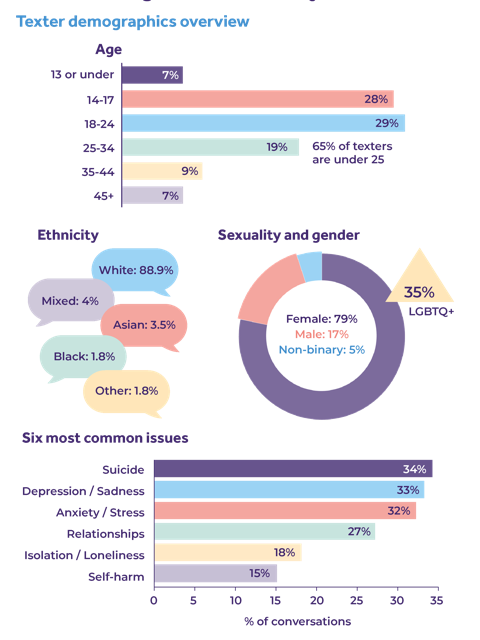 Children and young people form the majority of Shout 85258’s texters, with 65% aged 25 and under. Strikingly, although the rates of suicide in the UK increase with age, peaking between the ages of 45 to 49, we find suicide is one of the most common conversation issues tagged by our volunteers across all age groups; 18 to 24-year-olds texting Shout were the most likely to discuss suicide (39% of their conversations).* 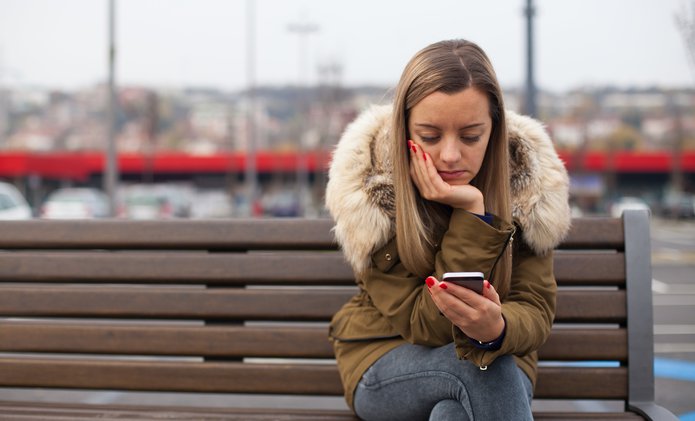 I was speaking to a suicidal young adult. She was desperate and all I wanted to do was reach into my computer and somehow rescue her. We chatted further and she found the strength to call her mum and ask her to help keep her safe.

Loneliness might usually be associated with older people, but it’s also a problem for our younger texters. Against a backdrop of social media ‘FOMO’ (fear of missing out) and the Covid-19 pandemic, we have taken 68,000 conversations with texters who felt lonely or isolated. Nearly a third of these have been with people between the age of 18 and 24. With loneliness comes other issues: texters who contacted us about loneliness were more likely to discuss feelings of depression and sadness, or to talk to us about relationship problems.

Our data show that school is likely to have an impact on mentions of bullying in texters aged 17 and under. When schools closed in March 2020 due to the pandemic, we saw a 59% reduction in the mentions of bullying, compared to the 50 days preceding the closures.

In order to spread awareness of Shout 85258 to young people we have forged partnerships with charities and organisations including The Mix, YoungMinds, Winston’s Wish, Diana Awards, Place2Be, Cameron Grant Memorial Fund, Student Minds and Hector’s House.

Based on recent survey data, 25% of our texter population told us they are at university or college, and we estimate that around 125,000 of these first 500,000 conversations were with students, a crucial audience for us to support. 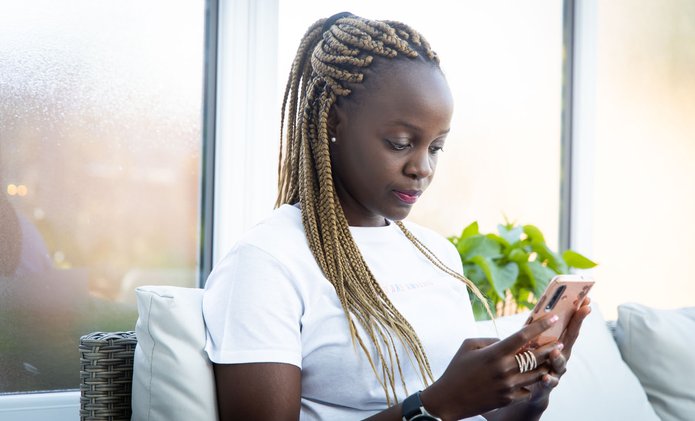 Shout 85258 is a vital service for young people struggling with their mental health and has provided much needed support during a very difficult time. It is an incredibly important partnership for YoungMinds, especially as we know that the pandemic is deepening the crisis in young people’s mental health and that many are struggling to cope. We know that many young people find it easier to reach out for help via text and during the pandemic, with many of us at home, it has been even more important to provide an easy and accessible way to get support.

Student Minds is an example of one of our commissioned partnerships, where we provide the partner with unique insights into their specific audience, in this case through a bespoke ‘STUDENT’ keyword. We launched this partnership on 3rd August 2020 to support students across England and Wales as part of Student Minds’ designated Student Space.

Since launch, 51% of conversations using the ‘STUDENT’ keyword had anxiety or stress as an issue, compared to 33% across the whole service. ‘STUDENT’ keyword users were also more likely to talk about loneliness or isolation (28% versus 17%) and Covid-19 (19% versus 7%), consistent with widely reported concerns around the challenges that students have faced during the pandemic. 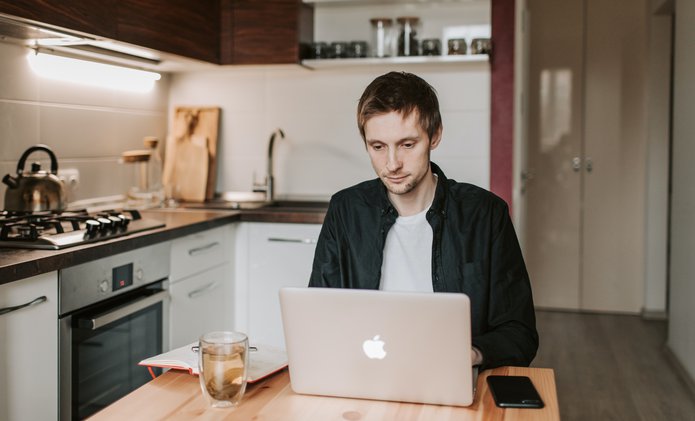 Thank you so much for your support tonight. I couldn’t sleep and had too many thoughts racing through my mind. I felt unable to talk to anyone else so thank you for being there. You helped me calm down so I can get some rest. I felt heard and respected. 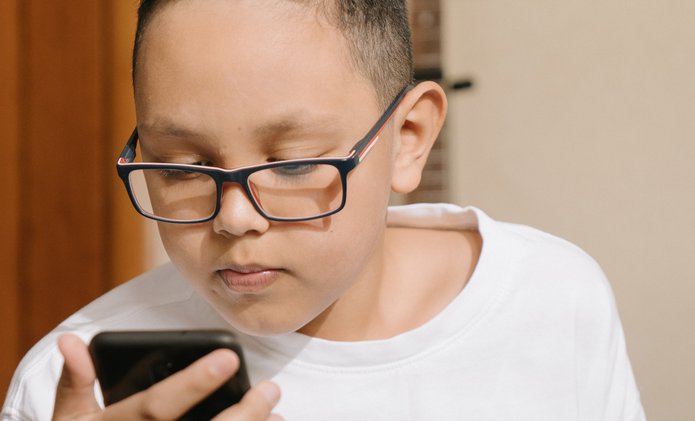 So many texters are battling with resisting self-harm. Self-harm carries a stigma and it is easier for people to discuss it in an anonymous setting, as often the self-harm is kept secret from friends and family.

The graph on the right shows that texters aged 13 and under were the age group most likely to discuss bullying with us at 9% of their conversations. 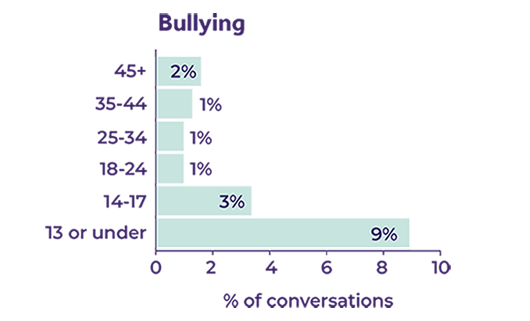 The graph on the left shows that texters aged 13 and under were most likely to discuss self-harm with us. 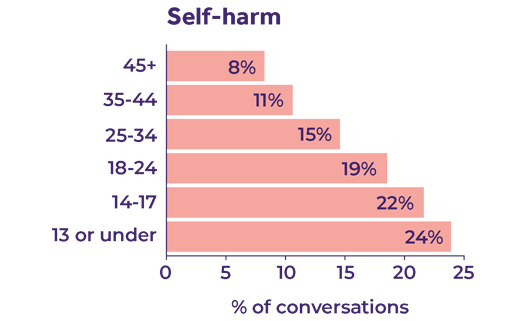 Thank you for the space you created for me tonight. I really felt heard. It meant that I didn’t take the idea of self-harming any further.

A common theme in these conversations about Covid-19 was uncertainty, which peaked before lockdown was announced on March 23rd. Thereafter we saw larger numbers of people concerned about a lack of routine and mentioning feeling trapped.

From April 2020, there was an increase in the use of words such as ‘exhaustion’, ‘tired’ and ‘fatigue’. Pre-lockdown, these appeared in around 15% of conversations, reducing slightly to 13% at the beginning of lockdown and then increasing gradually over the last few months to be included in around 20% of conversations each day. Mentions of the words ‘strain’ and ‘drain’ also gradually increased. 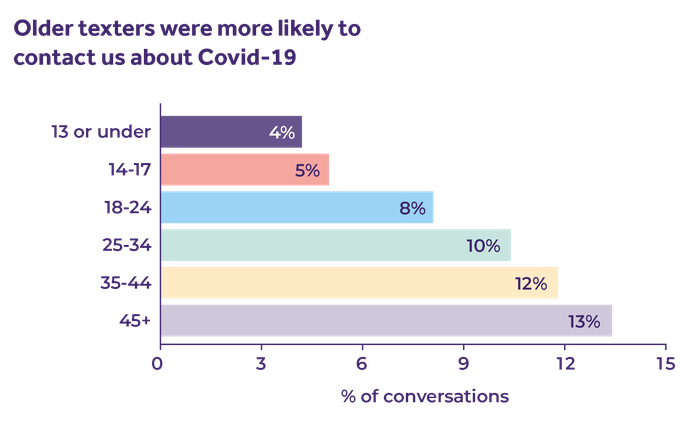 Thank you, you took my mind off the feeling of wanting to self-harm and I now feel in a better situation to go to sleep.

The majority of texters who used Shout 85258 identified as female, making up 80% of our first 500,000 conversations. This reflects patterns that we see in society, where the mental health of women and girls is deteriorating compared to that of men. For example, women are three times more likely than men to experience common mental health problems and rates of self-harm among young women have tripled since 1993.

We have taken 57,246 conversations about self-harm, 84% of which were with females and 65% with young women aged 24 and under. In these conversations, 43% also mentioned suicide and just over 6% mentioned body image. 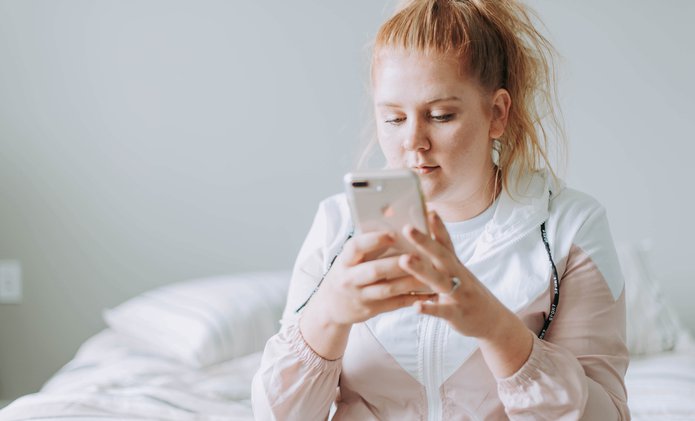 There is a specific group of individuals who we now know are at a much increased risk of mental disorders, particularly depression and anxiety and this group is young women aged between 16 and 24. For these individuals, mental disorder has increased in prevalence over the last 10 years, from around 10% to 25%. So 25% of young women have significant problems with anxiety and depression and a quarter of those self-harm. It’s a serious problem.

Our texter population is seven times more likely to report being autistic (7%) than the UK population (around 1%). One in 50 (2%) of our conversations mentioned autism or Asperger’s. 90% of autistic adults are thought to have a co-occurring mental health disorder* and autistic people are shown to struggle most with anxiety disorders. It is therefore not surprising that texters who are autistic mentioned anxiety or stress in 31% of conversations with us each day.

86% of autistic people who texted us found the service helpful and many mentioned that text is easier for them as a means of expressing how they feel. 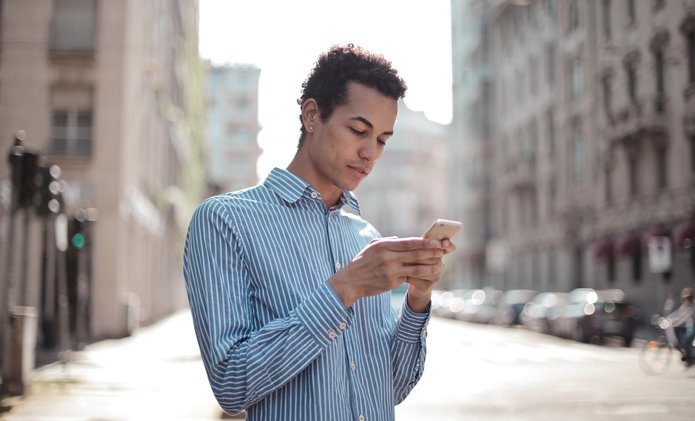 I am usually rubbish at reaching out to strangers as I am autistic and am scared of talking to people I don’t know, but I needed somewhere to go tonight as I am feeling really isolated and alone. My Shout Volunteer was completely non-judgemental. She helped me to stay calm and kept me safe from taking the pain out on myself.

One in three texters who reached out to us for support identify as LGBTQ+. We estimate to have taken around 177,000 conversations with people who identify as LGBTQ+*. During the first national lockdown in 2020, we took an additional 4,500 conversations with LGBTQ+ texters, many of whom felt ‘trapped in the Covid closet’ at home. This demographic were almost 40% more likely to mention self-harm than other texters (22% versus 16%).

Given the higher incidences of mental health problems and bullying or harassment experienced by people who identify as LGBTQ+, often from a young age, for these texters, having a safe space to be listened to without judgement was crucial and particularly resonated with their needs. 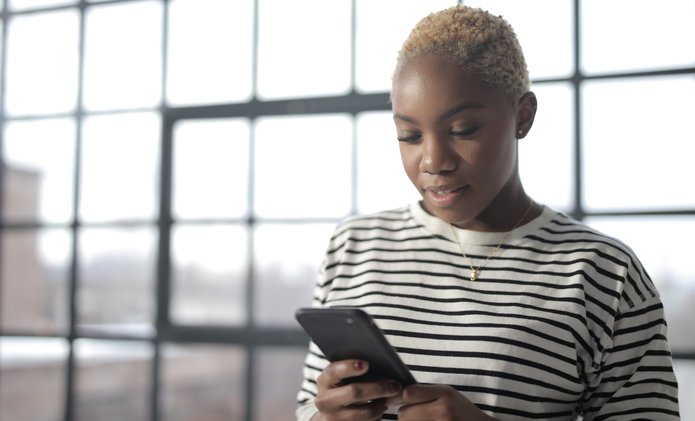 I thought about coming out, and I’m going to build up the courage to tell my mum about how I’m struggling with my sexuality. It was a great relief to be able to talk this through with someone, thank you.

Suicidal thoughts were the most common reason people texted Shout, with an average day seeing around 34% of conversations about this issue. The Shout service provides active rescues - an intervention by the emergency services to dispatch a wellness check to individuals we believe to be at imminent risk of ending their life or in danger as a result of a safeguarding issue.

Our volunteers are trained to assess risk in every single conversation and create a safe space for the texter to talk about the pain they’re experiencing. There are four steps associated with this process, known as a ‘ladder-up risk assessment’. These steps aim to establish whether a texter’s life is in immediate danger. 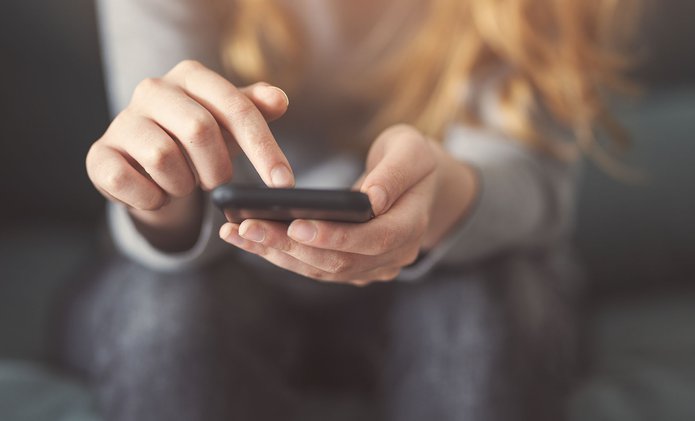 If a texter is considered to be at imminent risk, the volunteer will work with the texter to de-escalate the texter and guide them to a calmer frame of mind, working together to establish a plan to keep them safe. If a texter is unable to plan for their own safety, we will conduct an active rescue, a process that is always overseen by a Clinical Supervisor. 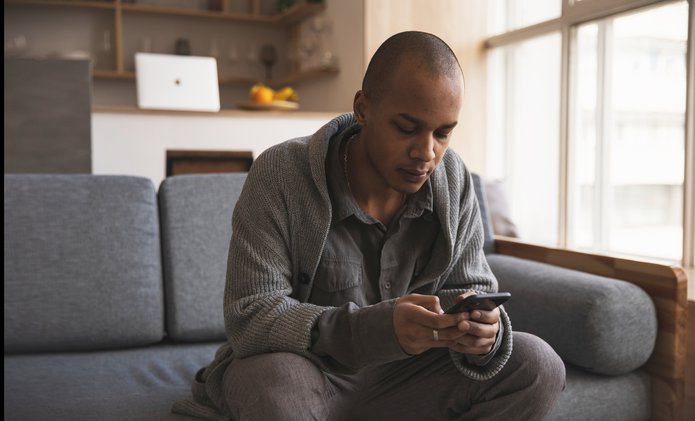 We were recently contacted by the parent of a 12-year-old girl who had been struggling with anxiety over the lockdown and who had decided to go to a river to end her life. In her parent’s words:

“Laura had been struggling with anxiety since the start of the lockdown. Without us knowing, things had gotten so bad that she had decided to go to a river near where we live and end her life. She went out on her scooter one evening as she so often does, and had planned to do this. The first we knew about it was when the police contacted us to explain what had happened and that Laura was with them and safe. Before the police arrived, Laura had contacted Shout and had a conversation with a volunteer. I’ve seen the text thread and have no doubt that the way the volunteer acted and the responses on the text caused Laura to stop and think, and then empowered her to phone 999 and ask the police to come and help her. I have no doubt at all that her life was saved.”

NB, name and personal details have been amended to protect anonymity.

We have been fortunate enough to maintain contact with this incredible family, who have since informed us that Laura is safe and has been referred to CAMHS as a next step for the further support she deserves.